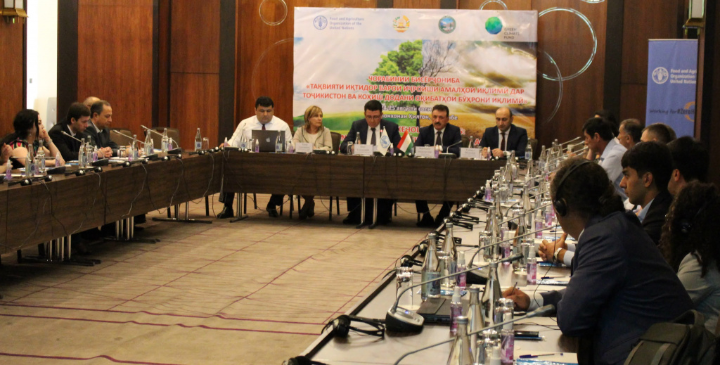 On August 24-25, 2022, the Food and Agriculture Organization of the United Nations (FAO), as part of the activities of the second preparatory project, held multilateral workshops in close cooperation with the Committee for Environmental Protection under the Government of the Republic of Tajikistan.

The project under consideration will contribute to improved reporting on greenhouse gas emissions reduction and increase the level of knowledge of stakeholders.

On the other hand, the project supports the creation of a monitoring and evaluation system to track actions to combat climate change in support of the implementation of Nationally Determined Contributions.

Mr. Oleg Guchgeldiev, FAO Representative in Tajikistan, stressed the importance of the Green Climate Fund country program for 2022-2027 to attract climate finance to the country and fulfill the country's obligations under the Paris Agreement, as well as to promote the implementation of the country's goals, which are reflected in the National Strategy document.

Considering that the problem of climate change in the country is discussed at different levels, the event was attended by representatives of various national and international organizations that are actively involved in the process of developing and implementing climate measures.

Abdulkodir Mavlodod, Deputy Chairman of the Committee for Environmental Protection under the Government of the Republic of Tajikistan, noted the response to the needs of the country and support for the implementation of the National Strategy for Adaptation to Climate Change until 2030 and in the medium term.

The preparedness project is part of a number of initiatives launched by FAO to support the National Designated Authority.

Last year, FAO successfully supported the country in strengthening the "Nationally Determined Contribution" document and revising the country's goals with the involvement of development partners, which was approved by the Government of Tajikistan and presented at COP26 in Glasgow, Scotland.

FAO will continue to contribute to Tajikistan's efforts to reduce national emissions and adapt to the effects of climate change.