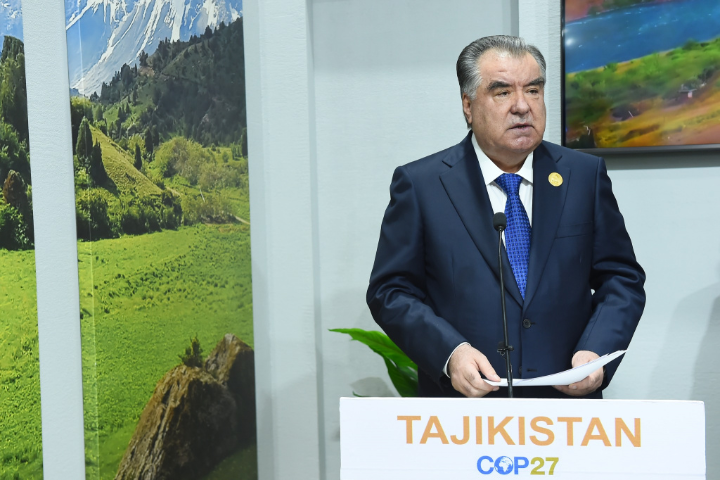 I am very pleased to participate with you in today's opening ceremony of the National Pavilion of the Republic of Tajikistan at the twenty-seventh Conference of the Parties to the United Nations Framework Convention on Climate Change, which is organized for the first time in the twenty-seven-year history of the Convention.

I am pleased that in a relatively short period of time we were able to produce a number of strategic documents in this area, such as the National Strategy for Adaptation to Climate Change until 2030, the Nationally Determined Contribution, the Fourth National Climate Change Report and the biennial Greenhouse Gas Report , which indicates the fulfillment of the obligations of the Republic of Tajikistan to the international community.

It is well known that the climate is inextricably linked with all areas of the state's economy. Clearly, climate change is changing our daily lives.

From our point of view, one of the main indicators of this process is the rapid melting of glaciers as a result of global warming. The melting of the largest land-based glacier in Tajikistan is a prime example of this claim.

Glaciers are the main source of fresh water, and their rapid melting, along with increased water demand associated with population growth and economic development, can have very negative consequences.

It is clear that this topical issue should be at the center of attention of the international community and especially political leaders.

I would also like to once again recall the proposal of Tajikistan to create a special international "Glacier Protection Fund", which can mobilize financial resources from various sources to take the necessary steps and achieve the goals set here.

I am confident that such initiatives will spark a new global movement to take the necessary collective action to protect glaciers from rapid melting and destruction.

In this regard, the Republic of Tajikistan has adopted many domestic programs and initiatives, such as greening, tax incentives, incentives for the import of electric vehicles and the development of the hydropower sector, which are aimed at preventing the emission of large amounts of greenhouse gases.

In this process, the Republic of Tajikistan plans to develop a national greening program, within the framework of which the planting of trees, shrubs and flowers will be increased several times throughout the country.

The Republic of Tajikistan hopes that foreign organizations, donors and developed states will continue to cooperate in solving important issues related to adaptation to climate change, reducing greenhouse gas emissions and preventing the rapid melting of glaciers.

I can say with full confidence that all the issues discussed in the National Pavilion of the Republic of Tajikistan at the twenty-seventh Conference of the Parties to the United Nations Framework Convention on Climate Change contribute to the formation of a cooperation mechanism in the direction of reducing the adverse effects of climate change not only in the Republic of Tajikistan, but also in the region but will also make a significant contribution at the global level.