As part of a plan of action to celebrate the 30th anniversary of state independence of the Republic of Tajikistan, specific measures are being taken to expand, landscape, plant flowers, and shrubs in the area of protection and improvement of the environment and health.

On February 13-14 of this year on the territory of Gorno-Badakhshan Autonomous Oblast general khashar was held, in which employees of regional departments and institutions of Khorog took part and cleaned the streets and avenues of the city from snow.

In the future, all necessary measures will be taken to maintain cleanliness and order in urban and rural settlements and to raise environmental awareness among the population.

Distinguished Heads of state and government, Dear Heads and members of delegations, Ladies and Gentlemen, At the outset, I welcome all of you in the... 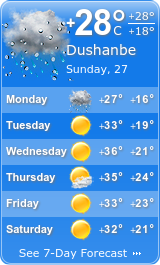 Note: Carousel will only load on frontend.