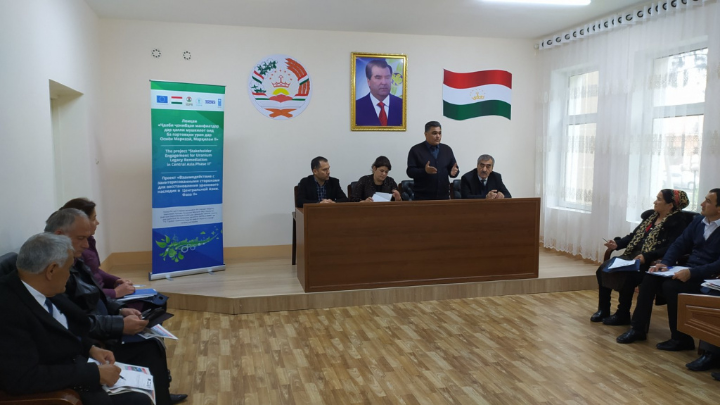 
In order to increase environmental knowledge and awareness of the residents of the rural jamoat of Gozien of the Bobojon Gafurov district, a meeting with the working group on environmental issues was held in the hall of the administrative building of the jamoat.

It should be noted that within the framework of the Project "Involvement of stakeholders in solving the problem of uranium waste in Central Asia, Phase II", the meeting was held in this rural locality for the second time. The meeting was attended by representatives of the public, local committees, the Health Center, institutions of general secondary education, housing and communal services, activists and media representatives.

On the issue of creating a working group to ensure cooperation and coordination of restoration work in this jamoat, representatives of the Main Department of Environmental Protection in the region, the public organization "Youth Group for Environmental Protection" and the editor-in-chief of the regional newspaper "Sogdiyskaya Pravda" spoke, who acquainted the participants of the meeting with information about the implementation of the project "Implementation of accessible agricultural routes on household plots of land taking into account adaptation to climate change", the role of the media and public organizations in solving environmental problems, information about the development of projects to solve environmental problems.

Also in the second part of the event, the participants were divided into two groups, work continued in small groups, presentations were heard from them. Each member of the community working group received a sample of the project development guide and the basic requirements for project development.

It is worth noting that these events make a significant contribution to the implementation of the "Comprehensive State Program for the Development of Environmental Education and Enlightenment of the population of the Republic of Tajikistan for 2021-2025".